Meldonium: widespread use at European Games

More than 70% of the sports contested at the inaugural European Games in 2015 had athletes competing in which meldonium was detected, a new study has found. On Tuesday the British Journal of Sports Medicine (BMSJ) published a study revealing that 13 medallists at the games self-declared taking meldonium, including six gold-medallists.

Meldonium was added to the 2016 WADA Prohibited List in September 2015, with the list coming into effect on 1st January this year. Already several athletes have since tested positive for meldonium use, including the high profile tennis player Maria Sharapova, who issued a statement accepting the findings on Tuesday.

– 23 (3%) of the 662 athletes tested self-reported taking the drug, but 66 (8.7%) of athlete samples subsequently analysed tested positive for meldonium.

– by extrapolating the sample athlete population tested, up to 490 of the 5,632 athletes competing at the games may have been taking meldonium, but this is ‘likely to be an overestimate’ (meldonium is registered for medical use in only 7 of the competing countries at the 2015 Games)

– 13 medallists, including 6 gold-medallists, were taking meldonium at the time of the 2015 Games 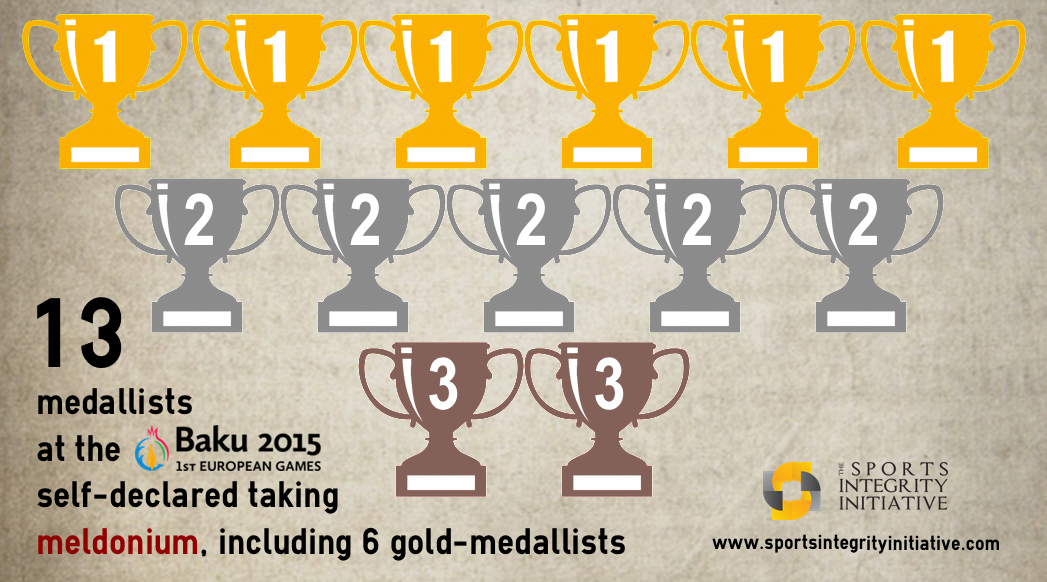 One of the more interesting findings in the study was the proportion of athletes in which meldonium was detected after laboratory analysis compared to the number of athletes who self-reported meldonium use at doping-control stations. According to the study, ‘at the time of providing a urine or blood sample at a doping control station, all athletes were asked to declare any medications or nutritional supplements taken during the previous 7 days.’

Only 23 (3%) of the 662 athletes tested self-reported taking the drug, but 66 (8.7%) of athlete urine samples subsequently analysed tested positive for meldonium. This amounts to ‘significant under-declaration of meldonium use by athletes’.

According to the study, such under-declaration ‘raises suspicion that many athletes did not want to let the anti-doping authorities to know about their use of meldonium’, most likely due to the already widespread view that meldonium had the ability to potentially enhance personal performance and shorten the recovery period after physical activity, amounting to a performance-enhancing drug, if not by name at this stage, but by its nature.

The under-reporting in itself offers another problem not strictly confined to meldonium; as the study notes, ‘although disclosure of this information is requested, there are currently no penalties under the existing World Anti-Doping Code for failing to do so’. Such observations offer difficult ethical dilemmas for anti-doping authorites trying to strengthen athlete accountability. This is especially relevant where the time taken for some compounds to progress from being suspected of having performance-ehancing properties to being banned by WADA can often be a lengthy process, which takes years to complete, as was the case with meldonium.

The BMSJ study concludes that its findings ‘highlight the excessive and inappropriate use and prescribing of this prescription drug in a generally healthy athlete population’, at a time before the drug was banned by WADA. Even before it was banned in sporting competitions, meldonium has not been approved by the Food and Drug Administration (FDA) for use in the United States, but is registered for medical use in 7 Eastern European that competed in the 2015 Games.

Clinically, meldonium is used to treat restrictions in blood supply to tissues, including conditions such as angina, myocardial infarction and chronic heart failure, as well as being prescribed in some instances for diabetes sufferers.

After Sharapova’s admission to meldonium use, Russia’s Minister for Sport Vitaly Mutko reportedly said the drug was ‘popular among the country’s athletes’, and that he suspected that ‘there could be several more cases’ such as Sharapova’s. ‘This medicine used to be allowed, it does not do anything major, it just helped a lot of people with their recovery times; it did not offer any unfair advantages,’ Mutko told the Russian news agency R-Sport.

WADA may consider appeal against Decision to c...

Russia tells UNESCO anti-doping should be free from political interference

Russia is hosting a two day meeting of the seventh session of the Conference of...

Investigators in the United Kingdom and the United States have found that computer hackers working...