• The Culture Media and Sport Select Committee has released the transcript in relation to its questioning of Sebastian Coe, President of the International Association of Athletics Federations (IAAF) on 3 December. Coe was questioned in regard to its inquiry into blood doping in athletics.

• The International Olympic Committee’s (IOC) Executive Committee meeting begins in Lausanne today, concluding Thursday. The official agenda states that the meeting will discuss Agenda 2020 and preparations for the Rio 2016 Olympics. However, as the theme of the meeting is ‘good governance in sport’, it will also encompass recent FIFA and IAAF corruption allegations, as well as the World Anti-Doping Agency’s (WADA) Independent Commission report into allegations of systemic doping in Russia.

• The World Anti-Doping Agency (WADA) is inviting applications for research grants to develop new and improved detection methods for performance-enhancing substances. More information is available on the WADA Grants homepage. Since 2001, WADA has committed $68 million towards scientific research. WADA has also updated its Technical Document for Sport Specific Analysis (TDSSA), which is intended to ensure that substances that are deemed to be a particular risk in certain sports are subject to a minimum level of analysis.

• The President of Peru’s football association, Manuel Burga, has been arrested as part of the US Department of Justice’s (DoJ) inquiry into corruption in football, reports Reuters.

• Cycling Time Trials (CTT) has reported one positive test and one possible anti-doping rule violation (ADRV) from the 44 samples it collected in 2015 on page 7 of its annual report. CTT, which governs time trials in England and Wales, told Cycling Weekly that more details cannot be released at present, as both cases are in the hands of UK Anti-Doping (UKAD).

• Scottish world champion darts player Gary Anderson has told The Scotsman that he deliberately lost a match against Adrian Lewis in 2011, due to the “disgraceful” anti-English abuse directed at Lewis. 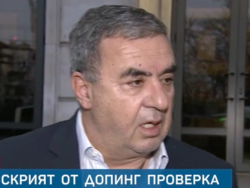 Nelly Jepkosgei has been sanctioned with a three year ban for tampering with doping control...