• The Serbian bodybuilding federation (BBSS) has sanctioned Marko Pavlović (Марка Павловића) with a four year ban for refusing a doping test at the national championships on 3 October, the Anti-Doping Agency of Serbia (ADAS) announced.

• Abdul Akhmadov (Абдула Ахмадова) has been sanctioned with a four year ban, the Russian Anti-Doping Agency (RUSADA) announced. The mixed martial arts (MMA) fighter returned an adverse analytical finding (AAF) for meldonium, reported Russian State news agency TASS, although the Russian MMA union has not announced details of the case. Judoka Tatyana Guzun (Татьяну Гузун) has been sanctioned with a two year ban from 10 July 2019 for returning an AAF, RUSADA also announced. The ban will run from 10 July 2019, which means that Guzun will keep the Gold she won in the -63kg category at the February 2019 Cadet European Cup in Follonica, Italy.

• The German football association (DFB) argues that it paid taxes relating to perimeter advertising in March 2019, and sent all documentation to the Frankfurt public prosecutor’s office. Last week, it was reported that prosecutors had raided the DFB offices and homes in five of Germany’s States in relation to alleged tax fraud by six officials. It is understood that prosecutors allege that six unnamed officials falsely declared advertising income. ‘An agreement was reached with the tax authorities on the complex of taxation of perimeter advertising in March 2019, and the DFB subsequently paid the corresponding taxes’, read a statement. ‘In addition, in March 2019, the DFB also handed over all known documents on this process to the Frankfurt public prosecutor’s office without being asked, and promised extensive cooperation’. 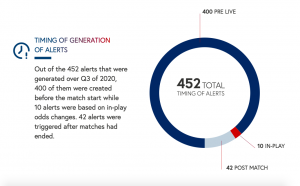 • Global Lottery Monitoring System (GLMS) reported 44 matches to its betting, sporting federation and league partners from 452 suspicious betting alerts generated between July and September 2020, its third quarter report (PDF below) reveals. The majority of these alerts (298) were generated in Europe and the majority involved football (370). Other sports where suspicious betting patterns were identified included basketball, e-sports, tennis, ice hockey, baseball, and American football.

• The FIFA Ethics Committee has completed its final report into sexual abuse allegations involving Yves Jean-Bart, President of the Haiti football federation (FHF). FIFA announced that the scope of its investigation has been expanded to include Yvette Félix, an Assistant Coach at the Centre Technique National in Croix-des-Bouquets, where the majority of the alleged abuse took place. Félix has been provisionally suspended for 90 days.

• On 15 October, the Court of Arbitration for Sport (CAS) heard Andrea Iannone’s and the World Anti-Doping Agency’s (WADA) appeals against an international motorcycling federation (FIM) Decision to sanction the MotoGP star with an 18 month ban. It is understood that the FIM accepted that an adverse analytical finding (AAF) for a metabolite of drostanolone was caused by contaminated food. Iannone is seeking annulment of the sanction, whilst WADA is seeking a four year ban. A Decision will be published in mid-November, announced the CAS.

The debate over transgender athletes’ rights...

AIU made “judgement call” not to announce ...