• The World Anti-Doping Agency (WADA) has released an updated version of its Prohibited Association List, which features Athlete Support Personnel that athletes are prohibited from associating with under Article 2.10 of the World Anti-Doping Code. The list features 155 names compared to the 166 featured on the 13 July List. The only addition to the List is Dorin Balmus, a Moldovan doctor who was sanctioned with a lifetime ban in September for complicity and tampering involving weightlifters. Twelve people have been removed from the list as their sanction has expired – Yungfeng Bai (China); Liviu Dragomir (Romania); Chao Fang (China); Rasheed Harun (Malaysia); Awn Kabariti (Jordan);  Guojun Li (China); Anzor Vashaev (Russia); Andrus Veerpalu (Estonia); Valeriy Volkov (Russia); Qian Xiao (China); Dingguo Yang (China); and Xiangang Yang (China). 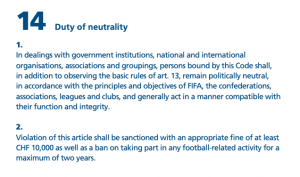 • FIFA has failed to respond to inquiries from journalist Tariq Panja, after he questioned why Fouzi Lekjaa has been allowed to retain his place on the FIFA Council, after being appointed Minister Delegate to the Minister of Economy and Finance in charge of the Budget. Article 14 of the FIFA Code of Ethics requires political neutrality, and was used to remove Vitaly Mutko from the FIFA Council ahead of the Russia 2018 FIFA World Cup, after he was appointed as a Deputy Prime Minister of Russia. Lekjaa is President of the Moroccan football association (FRMF) and is also a member of the Confederation of African Football’s (CAF) Executive Committee. He is a supporter of FIFA’s plans for a biennial World Cup. “Those who are against the World Cup every two years are actually selfish, as they discriminate against billions of people just to protect their own business interests”, he told 360Sport. “They should support the possibility of giving hope to the hundreds of millions of people who inhabit our continent”.

Couple of days since FIFA were asked about what Morocco FA president’s elevation to a cabinet post means for his seat on FIFA Council. Question arises because rules state no govt official can sit on FIFA Council. Russia’s Mutko was forced out for that reason. Anyway, no reply. pic.twitter.com/79TnvGmFRk

• Mary Cain has filed a lawsuit seeking damages from Alberto Salazar for emotionally abusing her during her four years at the Nike Oregon Project, reports The Oregonian. It is understood that the runner alleges that by 2019, due to Salazar’s abuse, she was depressed; had an eating disorder; was suffering with anxiety and post traumatic stress disorder; and was cutting herself. On 26 July this year, Salazar was declared permanently ineligible by the US Center for SafeSport, based on allegations of sexual and emotional misconduct.

Statement from British Cycling on the WADA rev...

Following the publication of the report, a UK Anti-Doping (UKAD) spokesperson said: “We welcome the findings of the...

• We would like to thank the World Anti-Doping Agency for their efforts in reviewing...