The date for the preliminary hearing of 104 people facing match-fixing charges in Italy has been set for 18 February 2016. According to the Italian newspaper La Republica, Antonio Conte, the current head coach of the Italian national football team, is amongst those charged. The hearing will be conducted in front of Cremona judge Pierpaolo Beluzzi, where it will be decided where there is enough evidence to proceed to a full trial.

Others facing match-fixing charges reportedly include the former Atalanta captain Cristiano Doni, Lazio footballer Stefano Mauri, Udinese coach Stefano Colantuono, former Lazio and Italy striker Beppe Signori and the former owner of Siena, Massimo Mezzaroma. The judge for the hearing, Beluzzi, reportedly told the paper that such a preliminary hearing was necessary before any case proceeded to full trial due the ‘complex organisation of a trial of this size and type, in particular considering the small offices of the Court of Cremona.’

As reported by the Sports Integrity Initiative when Italian prosecutors first indicted 130 people in February as part of its match-fixing probe, Conte, who denies any wrongdoing, has already served a ban imposed by the Federazione Italiana Giuoco Calcio (FIGC). The ban was for alleged involvement in the match-fixing conspiracy, and was cut to four months on appeal. Stefano Mauri was handed a six month ban. The new charges against Conte were understood to relate to ‘failing to report match-fixing’ during his time as manager of Siena during the 2010/11 season. The investigation, which Italian media has dubbed ‘last bet’, centres on allegations that compliant referees were paid to officiate certain games.

According to the Associated Press, there is just one match now under investigation, in which Siena won 1-0 against Albinoleffe in May 2001. Another match, a 2-2 draw with Novara in May 2011, was allegedly dropped from the inquiry.

Earlier this summer the Sports Integrity Initiative reported that a Cermona prosecutor had publicly requested that criminal charges be pressed against Conte and the 103 others indicted, and for a full trial to ensue.

Conte’s lawyer, Leonardo Cammarata, told La Republica that this request for a trial by the Cremona prosecutor was a ‘forcing’ of the process against Conte. ‘We have gone from active conduct alleged [against Conte] at the closure of the investigation, to a conduct by omission,’ said Cammarata, who also ruled out the possibility of a plea bargain. 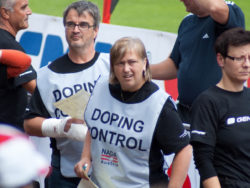 • The Russian Anti-Doping Agency (RUSADA) has announced that three athletes have been sanctioned for...