Houlihan’s participation at US Olympic Trials in doubt

Shelby Houlihan’s participation at the US Olympic Trials is in doubt, after the US Olympic and Paralympic Committee (USOPC) indicated that USA Track and Field (USATF) would respect a four year ban issued by the Court of Arbitration for Sport (CAS). USATF had initially indicated that Houlihan, who was issued with a four year ban for an anti-doping rule violation (ADRV) involving nandrolone, would compete (see below).

“Given there is an active appeal process, USATF will allow any athletes to continue competing until the process is completed.”

‘The US Olympic and Paralympic Committee, together with USATF, can confirm that we will adhere to the WADA Code and any CAS Decisions that govern athlete participation in sanctioned events’, read a statement from USOPC CEO Sarah Hirshland issued to Reuters. The apparent change in stance may have been spurred by a letter received today from the Athletics Integrity Unit (AIU) of World Athletics (see below).

Houlihan’s name remains included in the Start Lists for today’s 1,500m and the 5,000m (also below) at the Olympic Trials (see below). Houlihan maintains that her adverse analytical finding (AAF or ‘positive test’) was caused by eating pork contaminated with nandrolone within a burrito. At the CAS, she argued that her B sample hadn’t confirmed her A sample. This is perhaps where confusion over whether she can compete arose. 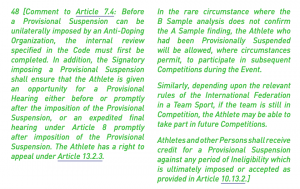 Article 7.4 of the World Anti-Doping Code outlines that a provisional suspension may be eliminated if an athlete demonstrates that an AAF is due to a contaminated product. A comment (see right) to that Article outlines that before a provisional suspension can be implemented, an internal review must be completed and if the B sample doesn’t confirm the A sample result, an athlete will be allowed to continue competing.

‘The Athlete asserted that the laboratory’s A-Sample AAF was wrongly confirmed by an improper B-Sample confirmation process that failed to follow the mandates of the Technical Documents governing the analysis and reporting of the 19NA as she had alleged an ingestion of pig offal and thus by her assertion, the laboratory should have carried out additional testing’, read the CAS statement on her case. ‘Therefore, the AIU had no basis to bring a Notice of Charge against her’.

USATF’s statement indicates that an appeal is pending. It is possible it took the view that as Houlihan is appealing, based on the idea that her B sample doesn’t confirm her AAF, then she isn’t provisionally suspended. However, the CAS statement was clear in outlining that Houlihan is subject to a four year ban from 14 January 2021. Competing in the US Olympic Trials would breach this and if she does run, she could face further action under Article 10 of the Code, which allows an existing ban to be doubled.

Houlihan’s case was unusual. Normally, an anti-doping organisation (in this case, the AIU) holds a hearing which is then subject to appeal at the CAS. In Houlihan’s case, the AIU, Houlihan, and the World Anti-Doping Agency (WADA) agreed to hold a single hearing at CAS. The International Standard for Results Management (ISRM) clarifies that in cases involving a single hearing, appeals can only be directed to the Swiss Federal Tribunal (SFT).

An appeal to the SFT would not involve a re-examination of any facts involved in Houlihan’s case. The SFT’s powers to review a CAS ruling are severely limited. It can only consider whether a CAS Decision violates ‘widely recognised principles of public order’ on Swiss public policy grounds. The SFT has only reversed a decision based on a a violation of Swiss public policy once in 30 years, however it recently did ask the CAS to reconsider Sun Yang’s case. WADA has yet to comment on the situation, and it is understood that the full CAS Decision will be published soon.

On Wednesday, 20 athletes were pulled from the Tokyo 2020 Olympics because their national athletics...

First, a US athlete claimed that a dodgy burrito had terminated their Olympic hopes and...

Alex Wilson is unable to participate in the Tokyo Olympics. The ad hoc Division of the...