• FIFA has sanctioned Alexander Shprygin (Александр Шпрыгин), a former member of the Executive Committee of the Football Union of Russia (FUR), with a two year ban for discrimination and defamation. In a thread on Twitter (below), Shprygin explained that the decision related to an Instagram post (also below) where he was pictured wearing a t-shirt in support of a former Torpedo Moscow player who was convicted of murder for stabbing a man to death in a street fight. He claimed that the decision also related to him posting a picture of a Dynamo Moscow fan wearing a skull symbol considered offensive by Football Against Racism in Europe (FARE), which he later deleted. ‘I could not know the meaning and significance of these symbols’, wrote Shprygin. ‘I will discuss the possibility of an appeal to the Court of Arbitration for Sport (CAS) with lawyers’.

The following was released today by the NBA 2K League. pic.twitter.com/rB50kRQ8S7

• The International Association of Athletics Federations (IAAF) has approved an application from Yekaterina Ivonina to compete internationally as an Authorised Neutral Athlete (ANA). As the Russian Athletics Federation (RusAF) remains suspended, Russian athletes are prohibited from competing internationally unless they can show that they were untouched by Russian State doping, and have been adequately tested over the past 12 months. It is understood that Ivonina has met the qualifying standard for the 3,000m steeplechase, and will compete at the Doha 2019 IAAF World Championships.

• Italy’s national anti-doping tribunal (TNA) has rejected an appeal from Stefano Lira against a four year ban imposed after the cyclist returned an adverse analytical finding (AAF) for clostebol. The 23 year old had argued that his AAF was caused by a spray used after a fall. Clostebol often turns up in dermatological creams, as the Therese Johaug case highlighted. 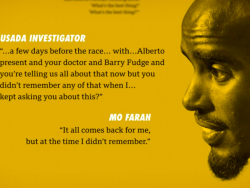