Russian State doping may go back to Soviet era

Film maker Bryan Fogel, who produced the ‘Icarus’ documentary featuring former Director of the Moscow anti-doping Laboratory Dr. Grigory Rodchenkov, has alleged that systemic doping of Russian athletes may date back to the Soviet era. In an interview for the Jim Rome show, Fogel alleges that Rodchenkov’s realisation that new doping tests would result in large number of athletes testing positive was a factor in the Soviet Union’s decision to boycott the 1984 Olympic Games. The Soviet Union boycotted the Los Angeles Games in retaliation to the US boycott of the 1980 Moscow Games, in protest against the 1979 Soviet-Afghan War.

“Grigory, he goes and visits Don Catlin in his laboratory, essentially to learn from Don Catlin how drug testing works”, states Fogel in the interview. “This was actually in late 1983 and Grigory was essentially a spy being sent over by the Russians, to spy on Don Catlin. So Grigory, after studying with Don Catlin, realises the Russians are going to be caught. That Russia do not have the anti-venom to the American test, and that all the Russian athletes who are all on steroids are going to be caught.

“Russia knew that every single one of their athletes were going to be caught for doping, because the steroid wash-out period was like six or seven months. They did not boycott the Olympics because of US-Russia relations. They boycotted the Olympics because Russia wanted to come to those Olympics and dominate America, to show itself as a force over America. Showcase that communism and Russian power.

“But their athletes were doped to the gills. They were all going to be caught and when they realised this was going to be a disaster for Russia, they boycotted the Olympics. This story goes way back in time, but over this next 30 years, they keep developing a methodology of how to game the system.”

Dr. Rodchenkov studied Chemical Kinetics and Catalysis at Moscow State University before graduating in 1982, after which it is understood that he spent time studying with Don Catlin, who founded the UCLA Laboratory in the US – also in 1982. It is understood that Rodchenkov did not start work at the Moscow Laboratory until 1985, leaving in 1994 to work for Interlab before joining the Anti-Doping Centre in Calgary for the 1998 Winter Olympics. After that, he returned to Russia and took a number of roles before returning to work for the Moscow Laboratory in 2005, becoming Director a year later.

In 2011, he was arrested along with his sister, Marina Rodchenkova as part of a doping conspiracy involving senior Russian athletics officials. He attempted to take his own life on 23 February 2011 and was sectioned within a mental hospital until 26 April, when he was released. In the ‘Icarus’ documentary, Dr. Rodchenkov tells Fogel that this release was personally ordered by Russian President, Vladimir Putin, due to an invitation to visit the London 2012 laboratory and in return for Rodchenkov’s running the Sochi 2014 Winter Olympic doping programme.

Rodchenkov claims that the invitation to visit the London laboratory was only applicable to him as an observer. “You can imagine how important this was to Russia”, says Rodchenkov. This resulted in the dropping of criminal charges against him. “It was my redemption”, he says. Rodchenkov points out that his boss was Russia’s former Deputy Minister of Sport, Yuri Nagornykh, who reported to Russia’s former Minister for Sport, Vitaly Mutko, who reported to Putin.

Mutko has since been promoted to Deputy Prime Minister and also heads the Local Organising Committee (LOC) for the FIFA 2018 World Cup Russia. He is directly implicated in WADA’s evidence as covering up the positive test of a Russian footballer. ‘The IP is aware of at least 1 foreign footballer playing in the Russian League had that benefit of a SAVE order’, reads Part One of the Independent Person Report, published in July 2016. ‘That SAVE decision was made by Minister Mutko and not Deputy Minister [Yuri] Nagornykh. Email evidence available to the IP shows that the SAVE decision for the football players was the final decision of “VL.” VL is the first name and patronymic name initials of the Minister of Sport, Vitaly Leontiyevich Mutko, who is also the President of the Russian Football Federation.’

Former Head of Doping Control at the Moscow Laboratory, Tim Sobolevsky, has also been working at the UCLA Laboratory. Last week, the Investigative Committee of the Russian Federation (SKR) issued new charges against Sobolevsky and Rodchenkov for obstructing their investigation. The SKR claimed that Sobolevsky and Rodchenkov had attempted to obtain the databases on behalf of the World Anti-Doping Agency (WADA) and Richard McLaren from a former Director of the Moscow Anti-Doping Centre, Maria Dikunets, in exchange for a monetary reward and protection in the US or Canada. As previously reported by The Sports Integrity Initiative, such charges appear a contradiction of pledges to protect whistleblowers outlined in Russia’s National Anti-Doping Plan (NADP).

Rodchenkov is currently under the US Federal Witness Protection Programme. Last week, the World Anti-Doping Agency (WADA) decided that the Russian Anti-Doping Agency (RUSADA) has not met its required reinstatement conditions. It took this decision after being provided with a new database of anti-doping tests carried out at the Moscow laboratory from January 2012 until August 2015.

It is understood that Rodchenkov and Sobolevsky provided WADA with the new database. In an interview that was widely interpreted as calling for Dr. Rodchenkov to be shot, honorary Russian Olympic Committee (ROC) President Leonid Tyagachev told the Govorit Moskva radio station that regarding Rodchenkov, Russia needed to “shoot for the truth, as Stalin would have done”.

Fogel’s claim that Russian State-orchestrated doping goes back to Soviet times is very significant. This is because it infers that the State-run doping programme was in operation prior to the current political regime and Rodchenkov was not operating as a ‘lone wolf’, as Russian authorities have claimed. 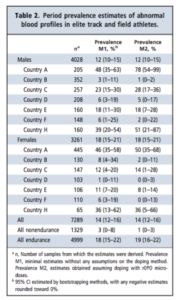 It also appears that RUSADA was manipulating its testing figures prior to 2010. The blood database obtained and analysed by Hajo Seppelt dates back to 2001 and allegedly revealed widespread doping across sport. A 2011 study published on the IAAF’s internet site, involving analysis of samples taken back in 2001, reveals (Table 2, right) that certain countries may have had an issue with doping. Yet it appears that nobody investigated until Seppelt’s December 2014 documentary.

Despite this, WADA President Sir Craig Reedie told the UK Parliament that he only became aware of corrupt payments in relation to Russian doping in December 2014, later revised to September 2014. If what Fogel and Rodchenkov allege is true, Russian State-doping pre-dates the creation of WADA in 1999. If that is the case, then WADA has questions to answer about why it didn’t act on all of the above information sooner.

Fifteen athletes from nine countries, competing in nine sports, were involved in anti-doping proceedings that...