On Wednesday, 20 athletes were pulled from the Tokyo 2020 Olympics because their national athletics federations failed to ensure that they underwent the minimum number of anti-doping tests required by World Athletics. Of course, it is vital that athletes competing at the Tokyo 2020 Olympics are sure that their competitors have been adequately tested.

However, not all track and field athletes are subject to the same testing requirements. Under World Athletics rules, the level of anti-doping scrutiny an athlete is subject to in order to compete at Tokyo 2020 depends on which member federation they represent.

The Athletics Integrity Unit (AIU) of World Athletics has absolute discretion to place member federations into three categories based on their perceived doping risk. The AIU doesn’t have to provide the reasons behind its categorisation, and member federations are not permitted to appeal.

The Anti-Doping Rules (below) of World Athletics mandate that ‘Category A’ member federations must ensure that athletes undergo at least three no notice out of competition (OOC) tests (urine and blood) conducted no less than three weeks apart in the ten months leading up to a major event, such as the Tokyo 2020 Olympics. ‘Category B’ federations need only to ensure that their athletes are ‘adequately tested’ in accordance with the World Anti-Doping Agency’s (WADA) International Standard for Testing and Investigations (ISTI) and the applicable anti-doping rules of the event in question. ‘Category C’ federations need only ensure that their athletes are ‘subject to testing’.

‘The obligations for each category of national federations can be found on our website’, emailed an AIU spokesperson in reply, directing us to this table. For Categories B and C, this table doesn’t specify the exact number of tests an athlete must undergo within a time period in order to be eligible for Tokyo 2020.

It does mention that athletes from Category B federations must ensure that their Testing Plan complies with WADA’s Technical Document for Sport Specific Analysis (TSDDA). This document, generally only applicable to international federations and major event organisers, outlines what percentage of total tests should be directed at specific prohibited substances based on the sport concerned.

‘A Minimum Level of Analysis (MLA) is specified for the Prohibited Substances and/or Prohibited Methods within the scope of the TDSSA for each sport or discipline, expressed as a percentage of the total number of eligible Tests and based on a Physiological Risk Assessment of that sport or discipline’, it reads. ‘The full MLA list for each sport or discipline is provided in Appendices 1 and 2 of this Technical Document which are also a mandatory component of the TDSSA’. As the number of required tests for particular substances is expressed as a percentage (see right) of the testing total, comparison with the testing requirements applicable to Category A is impossible.

The ISTI also doesn’t specify exactly how many tests an athlete must undergo in order to be considered ‘adequately tested’ or ‘subject to testing’. The Anti-Doping Rules of the Tokyo 2020 Olympics largely cover the Games period (13 May to 8 August) in which the International Olympic Committee (IOC) has testing authority. It specifies that outside of this period, it has delegated responsibility for testing to the International Testing Agency (ITA).

The ITA boasts that its eight month long testing programme ahead of the Tokyo Olympics is ‘the most extensive anti-doping programme ever implemented ahead of an edition of the Olympic Games’. It outlines that back in 2019, it conducted a ‘risk assessment’ on athletes likely to qualify for the Games, resulting in 25,000 recommendations to international federations and national anti-doping agencies (NADOs) aimed at ‘closing potential testing gaps for athletes carrying a certain elevated risk level in the crucial period ahead of the Games’.

The ITA’s mission was to work with IFs and NADOs to ensure that all athletes who qualify for the Games are adequately tested. Yet under the Anti-Doping Rules of World Athletics, Member Federations are held responsible for any failure to meet obligations (see right).

This is despite the fact that member federations are not permitted to test their own athletes under the AIU’s own rules. They mandate that ‘No Testing is to be physically conducted by your federation’ (see right).

It appears that the member federations did know about potential gaps, but could do little about the problem due to not enough time remaining to complete the required tests. Belarus had three athletes pulled from the Games: high jumper Maria Zhodik (Марии Жодик); and 400m runners Anna Mikhaylova (Анны Михайловой) and Kristina Mulyarchik (Кристины Мулярчик).

‘Maria met the qualifying standard on 25 June at the Belarus Championships’, said Head Coach Yuri Vikentievich Moisevich (Юрий Викентьевич Моисевич) in a statement. ‘She added 10cm to her personal best. Previously, she cleared 186cm, but now she had cleared 196cm. This is a serious increase. At the request of the AIU, Zhodik and two of our runners Anna Mikhaylova and Kristina Mulyarchik were required to pass three out of competition doping tests with an interval of 21 days.

‘We hoped that the AIU would compromise, but there are 20 athletes in track and field around the world who find themselves in a similar situation. The AIU decided that if you allow one, then the rest should also be allowed.

Without the athletes passing additional tests, the AIU risks missing somebody before the Games, so it banned everybody who found themselves in a similar situation.’

Ukraine faced a similar situation. ‘Due to the pandemic and, as a result, significant changes in the sports calendar of competitions and the timing of qualifying for the XXXII Olympic Games, athletes who qualified for the Olympic Games in the last weeks before the qualifying window had to pass three non-competitive doping tests in a very short, limited time,’ its athletics federation (ФЛАУ) outlined in a statement. 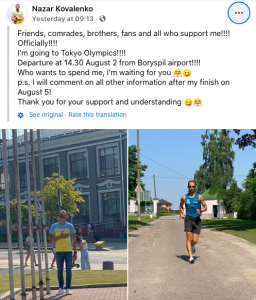 As such Mykhailo Havryliuk (Михайло Гаврилюк – hammer throw), Nazar Kovalenko (Назар Коваленко – race walking) and Natalia Pyrozhenko-Chornomaz (Наталія Пироженко-Чорномаз – 4x400m relay) are not permitted to compete. “Until the end of May, Havryliuk did not have a result that suggested he would be able to qualify for the Games, even as a candidate”, ФЛАУ Secretary General Iolanta Khropach (Иоланта Хропач) told Tribuna. “He was given two out-of-competition doping tests, but there was no time for the third. Well, who is to blame for this, that there was no time?”

However although nothing has been announced, it appears that a compromise may have been reached. Kovalenko and Pyrozhenko-Chornomaz appear to have arrived in Tokyo, according to social media posts (see right). Kovalenko appeared to indicate that he would be competing.

The Athletics Federation of Nigeria (AFN) partially accepted responsibility for the ten Nigerians that were pulled from the Games. ‘The Athletics Federation of Nigeria has put in place appropriate measures to comply with Rule 15 of the Anti-Doping Rules of World Athletics’, read a statement (below). ‘All our athletes resident in Nigeria & who qualified for the Olympic Games completed the three mandatory tests. Most of our top athletes resident in the USA also completed their tests. However, a few athletes in the American collegiate system were tested, but those tests were deemed not to have complied with WADA sample collection & analysis standards. It must be noted that no Nigerian athlete tested positive to prohibited substances.

‘Also to note is that 12 top Nigerian athletes have been cleared and are eligible. The AFN bears responsibility for any lapses that may have occurred during the process and reassures Nigerians that our performances will not be negatively impacted. The President of the AFN, Chief Tonobok Okowa has taken proactive steps to avoid future occurrences by appointing Professor Ken Anugweje as the head of the Medical and Anti- Doping  Commission of the Federation.’

1. The Athletics Federation of Nigeria has put in place appropriate measures to comply with Rule 15 of the Anti-Doping Rules of World Athletics. pic.twitter.com/koQQj2w6Bo

Nigerian athletes are protesting about the situation (see below). WhatApp messages posted on Instagram suggest that the AFN failed to effectively communicate the problem to the affected athletes until after the AIU announcement.

Earlier today in Tokyo, some Nigerian athletes protested their exclusion from the #Tokyo2020.The Athletics Integrity Unit of World Athletics had on Wednesday released a report, disqualifying 10 Nigerian athletes for not meeting up to 3 Out of Competition Tests needed to compete. pic.twitter.com/5aRVnCgeFC

A post shared by Chidi A. Okezie, OLY (@chidibangbang)

We need someone to speak to us athletes and answer all our questions.

The unfairness of the situation was summed up by Nigerian athlete Blessing Okagbare, who remains qualified for Tokyo 2020. ‘I have said it before and I will say it again’, she wrote on Twitter (below). ‘If you do not know the sport, are not passionate about it/us (the athletes), then you have no business there as an administrator. The sport system in Nigeria is so flawed and we athletes are always at the receiving end of the damages.

‘They were busy fighting over power, exercising their pride over Puma contract/kits forgetting their major responsibility; “THE ATHLETES”. It’s sad that this cycle keeps repeating itself and some people will come out to say I am arrogant for speaking my truth. It is my CAREER.’

I have said it before and I will say it again. If you do not know the sport, not passionate about it/Us (the athletes), then you have no business there as an administrator. The sport system in Nigeria is so flaw and we athletes, are always at the receiving end of the damages..

Were the athletes ever informed about the complex requirements outlined in this article? Were they given the chance to submit themselves for testing in order to ensure that they could compete? Is it fair that an athlete is pulled from the Games through no fault of their own and when there is no evidence that they’ve done anything wrong at all?

Twenty athletes have lost their Olympic spot due to the failures of sport’s administrators. They have done absolutely nothing wrong. Yet nobody in sport has apologised for crushing their dreams.

Joint statement by Michael Petrou* of the Coun...

The burrito and the ban: Shelby Houlihan’s four year sanction

In June, the Court of Arbitration for Sport (CAS) banned US middle distance runner Shelby...

Mark Dry: who’s guilty of tampering with what?

Mark Dry is fed up with people congratulating him for ‘winning’ his appeal against a...