The global anti-doping system appears compromised ahead of the PyeongChang 2018 Winter Olympics, according to a documentary produced for ARD (video below). Undercover athletes were prescribed prohibited substances by a Swiss doctor shortly before the Games, and experts were able to open and reseal both types of sample collection bottles used by anti-doping organisations across the globe. Experts working in laboratories licensed by the World Anti-Doping Agency (WADA) were unable to tell the difference between sample bottles that had been opened and resealed, and those that had not.

The documentary’s revelations about sample bottles has caused widespread confusion ahead of PyeongChang 2018. Berlinger, which manufactures the 2016 BEREG-KIT bottles and the September 2017 BEREG-KIT Geneva bottles, has insisted that the sample bottles at PyeongChang 2018 ‘will be capable of being securely closed and stored’. Both types of bottles are used by anti-doping organisations (ADOs) across the world to collect and store urine samples.

‘Should security shortcomings be confirmed, Berlinger Special AG will take additional measures to safeguard the samples collected at the coming Olympic Winter Games in PyeongChang’, continued the Swiss manufacturer. ‘Among the options here, Berlinger Special AG is considering the use of doping sample containers with a modified closing mechanism that cannot be incorrectly handled. Corresponding trials are currently under way, and all the results of these will be made available.’

WADA has recommended that the International Olympic Committee (IOC) use the 2016 BEREG-KIT security bottle at PyeongChang 2018, despite the fact that journalists also showed how these bottles could be compromised and resealed. WADA released its statement after the documentary was screened on the evening of 29 January (the English version was not available until 31 January). It launched an investigation on 28 January after being informed about issues with the BEREG-KIT Geneva bottles by Cologne Laboratory officials as a result of the investigation for ARD.

‘It has been confirmed that a proportion of the new generation BEREG-KIT Geneva security bottles are susceptible to manual opening without evidence of tampering, whether they have been frozen or not’, read a WADA statement. ‘WADA is currently ensuring that all potential causes for these irregularities are being explored and in the meantime has recommended to the IOC that for PyeongChang 2018 they use the earlier model BEREG-KIT, which was first released in 2016 for use in particular at the Summer Olympic Games in Rio and which reported no such issues. To that end, through its anti-doping partners, WADA has managed to source enough kits of the earlier model to cover the entire testing program in place for PyeongChang.’

The documentary also demonstrates that the 2017 Geneva bottles do not require freezing to open, just 72 hours in a fridge. The bottles were also able to be effectively resealed. It was demonstrated how some Geneva sample bottles could be repeatedly opened and resealed. This shows that in the case of the 2017 Geneva bottles, Berlinger’s claim that ‘The bottles are either destroyed or retain visible traces of tampering if any unauthorised attempt is made to open them’, is not accurate. It also appears this may be true for the 2016 bottles.

The documentary shows how the 2016 bottles WADA recommends are used for PyeongChang 2018 can be compromised. Any attempt to force open the bottle resulted in the breaking of the cap, rendering any attempt at tampering obvious. Glass expert Sven Lammek showed how the neck of the bottle can crack under heat, leaving the cap intact. Replacement bottles can then be bought cheaply on the internet, the cap screwed back on and copies of the labels can be made. Experts at a WADA-accredited laboratory were unable to tell the difference between a compromised bottle and the real thing.

The same bottles bought online also fit the caps introduced on the BEREG-KIT Geneva bottles. Experts also showed how the new caps can be easily faked. Journalists also showed how glass factories in China can manufacture fake bottles and caps after being sent a 3D scan of the bottles.

The evidence within the documentary raises questions about whether any sample bottles used for long term storage would now be considered invalid. This means that any lawyer acting for an athlete who is charged with an anti-doping rule violation (ADRV) based on a sample collected using such a bottle could argue that it has the potential to be compromised. “The fight for clean sport is over now”, said German sports lawyer Michael Lehner in the documentary. “I am speechless”.

A life ban was recommended for Dr. Sergey Portugalov in the first Independent Commission (IC) Report into allegations of systemic Russian doping in November 2015. Part two of the ‘Doping: Top Secret – Olympic Conspiracy’ documentary produced for ARD alleges that he is still operating, despite his ban.

Journalists received documents from Russia which they allege prove that Dr. Portugalov is still working with athletes. These include a collaboration with a Swiss doctor involving tests on humans regarding a substance developed in Russia that allegedly enhances athletic performance (contract 765/12).

An undercover athlete visits the Swiss doctor, who has worked with a number of professional athletes and teams. After undergoing blood tests, the doctor recommends injecting testosterone into the arm or leg, and provides the undercover athlete with a patient information leaflet about the recommended treatment. The documentary also alleges that concern about the Swiss doctor were first raised in 2009, in the form of a letter from the International Cycling Union (UCI) regarding substances prescribed to a young athlete.

The case regarding Dr. Portugalov is more complicated. Although a life ban was recommended by the WADA IC Report in 2015, he was not sanctioned until 10 March 2017. WADA did not update its Prohibited Association List to include Dr. Portugalov until 10 April 2017 after being informed of his omission by The Sports Integrity Initiative, 17 months after WADA first recommended his lifetime ban. It would therefore appear that Dr. Portugalov was not prohibited from working with athletes until 10 March last year.

More than one way to skin a cat

In the Icarus documentary and in the New York Times, Dr. Rodchenkov said that an FSB agent had presented him with a previously sealed sample bottle that had been opened, with its uniquely-numbered cap intact. “When I first time saw that bottle is open, I did not believe my eyes”, he said. “I truly believed this was tamper proof”.

It would appear that the FSB decision not to open the bottles in front of Dr. Rodchenkov was a calculated move. WADA has pursued the idea that the bottles were opened using a metal or plastic tool to force the caps, leaving identifiable scratches and marks. In the first Independent Person (IP) Report produced for WADA, a ‘scratches and marks’ expert demonstrated to Richard McLaren how the caps could be removed.

“The bottles are tamper evident”, he said at a press conference. “With relatively easy training, people can identify if there is problem with the samples”. A later forensic report, used to back Part 2 of the IP Report, alleged that caps could be removed using a metal tool that left marks upon the caps.

However, the investigation for ARD reveals that WADA may have been labouring under a misapprehension. Journalists have demonstrated an easier way to compromise the sample bottle, leaving no marks on the bottle or the lid. Perhaps there are also other ways. Today, perhaps Evgeny Blokhin is having a little chuckle to himself.

The importance of the investigation conducted for ARD is that it shows that every single doping sample has the capability of being manipulated. This will not have gone unnoticed by lawyers defending athletes against doping charges. The integrity of the global anti-doping system has indeed been compromised. 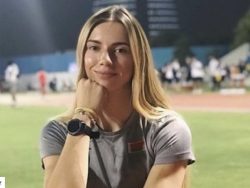 On Wednesday, 20 athletes were pulled from the Tokyo 2020 Olympics because their national athletics...

First, a US athlete claimed that a dodgy burrito had terminated their Olympic hopes and...

Is the ISTI the only standard, or the minimum standard, for notification requirements?