The number of anti-doping tests conducted by the International Tennis Federation (ITF) declined for the first time in ten years in 2020, illustrating the impact that Covid-19 is likely to have on the testing programmes of international sporting federations. The ITF reported 3,282 tests in 2020, its lowest number since 2013, and the first time that ITF testing numbers have fallen since 2010. 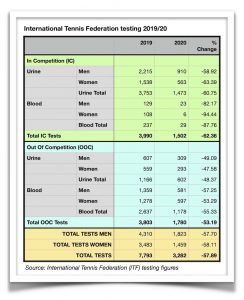 The total tests performed by the ITF in 2020 were less than half the 7,793* reported in 2019, as the number of tests performed both in competition and out of competition fell. Other sporting federations are likely to report a similar fall in testing numbers, due to the difficulty of complying with lockdown restrictions and health and hygiene procedures, whilst also maintaining anti-doping protocol, which requires athletes being tested to be monitored at all times.

For ADOs, comparing 2020’s testing statistics to previous years is problematic. For example, the international ski federation (FIS) resumed testing in April after a short break. As such, it recorded the number of tests reported from then until December. These cannot be meaningly compared to its 2019 statistics, which run from 1 May 2019 until April 2020.

FIFA refers to the difficulty in comparing testing figures in its 2019/20 Anti-Doping Report. ‘The worldwide COVID-19 pandemic, which started in January 2020, has had a significant impact in terms of planning and implementing FIFA’s anti-doping programme, as tournaments have had to be postponed and matches have not been played’, it reads. ‘This leads to a distortion of the data, which should be taken into account when comparing the data in this report with those in future reports’.

In June, the Cycling Anti-Doping Foundation (CADF) warned that as most of the cyclists in the international cycling union’s (UCI) registered testing pool (RTP) are in countries where lockdown restrictions have been implemented. As such, a 90% decrease in out of competition (OOC) tests had been reported for the two month period following the outbreak of the pandemic as compared to the same period in 2019.

It is not just international sporting federations that have been affected. Figures from national anti-doping organisations (NADOs) confirm that anti-doping tests have declined both in competition (as can be expected due to cancellation of sporting events) and outside of competition.

The US Anti-Doping Agency (see right) reports a massive decline in both in competition (IC) and OOC tests. Figures from UK Anti-Doping (UKAD) show an even greater decline in testing. For the first quarter of 2019/20 from 1 April to 30 June 2019, UKAD reported 2,212 test attempts, 2,017 of which were successful. For the same period in 2020/21, UKAD reported just 126 test attempts, 124 of which were successful.

The World Anti-Doping Agency (WADA) first warned that testing athletes during the Covid-19 pandemic could be problematic in March 2020. It outlined that ‘provision of whereabouts information, sample collection and transport to laboratories, sample analysis, education programs, investigations, result management, therapeutic use exemptions, compliance and other activities’ were likely to be impacted by Covid-19. It added that ‘border closures, mandatory quarantines or isolations, cancellations of flights, social movement restrictions, office closures and cancellation of sporting events are all hindering the normal day-to-day work of those involved in anti-doping’.

WADA updated its Covid-19 guidance and Guidelines in May and November 2020. ‘While the biggest concerns expressed were the impact on testing and the health and safety of all concerned, some also raised that these needed to be weighed carefully’, reads its November 2020 Survey. ‘One ADO said it well when they said: “The balance between implementing the planned testing program and protecting the health and safety of all stakeholders”’.

A total of 103 respondents to WADA’s Survey said that testing has been impacted by Covid-19, and 59 of them (57.3%) rated that impact as ‘a lot’ (see right). Fourteen of 70 ADOs had adjusted their test distribution plans (TDPs) as a result of the pandemic, and inability to continue a testing programme was flagged as the major concern by ADOs.

The guidance and updates issued by WADA were welcomed by the majority of the 120 ADOs that responded to its Survey. However WADA’s initial March 2020 advice drew some criticism for publicising that a decrease in testing was likely, as this could alert doping cheats that they are less likely to be tested.

“WADA’s messaging was contradictory”, said an athlete in response to WADA’s Survey. “On one hand they stated athletes will be required for testing and in public they stated that testing will be reduced. I would have preferred that they did not come out with such statements. This is confusing and actually leads to high risk athletes potentially thinking about cheating since testing is reduced.”

When asked if testing should be permitted if it involves departures from the International Standard for Testing and Investigations (ISTI), such as the processing of a urine sample without sample collection personnel being present, the majority of respondents (57.45%) to that question agreed. In April, before the Survey’s November publication, WADA hadn’t verified a ‘virtual testing’ plan put forward by USADA that would allow testing to continue during the pandemic.

Project Believe was a short term effort designed to fill the gap of reduced testing until USADA’s OOC testing could get back to normal. It is understood that WADA was aware of the project, but never gave its official approval. USADA is still using the dried blood spot collection that was part of Project Believe, and is hoping to be able to refine virtual testing with WADA’s approval.

WADA’s current Guidelines outline that it is up to ADOs to assess if testing should continue or resume, based on what restrictions are in place in the country in question and an assessment of whether it is safe to test athletes. WADA emphasises that if an ADO decides to stop testing, it should advise WADA.

ADOs are encouraged to use an intelligence-based approach to testing, and to prioritise the testing of athletes who may qualify for the postponed Tokyo 2020 Olympics or Paralympics, or that may qualify for World Championships. WADA’s Guidelines point out that even if testing is permitted, restrictions due to Covid-19 may prevent an ADO from getting samples sent to a WADA-accredited Laboratory. If a Laboratory is open and accepting samples, WADA outlines that it may refuse to accept samples from overseas due to the risk of transmitting Covid-19.

Annex C of the Guidelines also sets out potential questions that ADOs should ask athletes when conducting OOC tests, in order to ensure the safety of sample collection personnel. The questions are designed to determine if the athlete has Covid-19 or has been in contact with an infected person.

This is a potential minefield, as it offers athletes who are doping a ready made excuse for avoiding a test. As such, the Guidelines suggest that athletes should be ‘verbally notified’ that any false or misleading information could be considered as equivalent to tampering with a doping control, an anti-doping rule violation (ADRV) that carries a four year penalty. Provision of false information about Covid-19 therefore attracts the same ‘tampering’ sanction as providing false location information to doping control personnel.

Elite sport is focussed on victory. It is not the taking part that counts. The amount of funding that sport’s governing bodies receive is often directly related to the performance of its elite athletes in international competition. With most competitive sport postponed, many athletes will be utilising time during lockdown to hone their training techniques.

Unfortunately, signs have already emerged that some people within sport are utilising procedures put in place to combat the Covid-19 pandemic to ensure victory. Teams involved in the Cup of African Nations are alleged to have falsely quarantined players due to Covid-19 in order to take them out of competition, reports the Zimbabwe Herald. It would perhaps be naive to assume that no athletes will utilise the apparent gap in testing to dope.

This is why, more than ever before, investigations and whistleblowing are key. Although the testing system catches few dopers – analysis of WADA’s 2017 and 2018 figures showed that around 0.6% of tests result in an ADRV – sport emphasises that testing has a huge deterrent effect. From March 2020 onwards, this deterrent effect has weakened. Sport’s usual defence against athlete doping is down.

This week, the International Olympic Committee (IOC), the International Paralympic Committee (IPC) and Tokyo 2020 published the first series of ‘Playbooks’, which set out the responsibilities of stakeholders for ensuring that the Tokyo 2020 Olympics is safe. In addition to concerns about whether they are competing against athletes that may have Covid-19, athletes are worried that competitors may have used the restrictions put in place to combat Covid-19 to dope ahead of the Games with impunity.

It would be extremely unfair to blame international federations, ADOs, NADOs, or WADA for any of this. Nobody could have foreseen such a pandemic or the length of time that it has endured. But unfortunately, quarantines over potential Covid-19 cases and questions over whether athletes have been adequately tested are likely to cast a shadow over Tokyo 2020.

*This number is 20 more than the number reported in the ITF’s 2019 figures, due to its apparent minor miscalculation of the total number of out of competition blood tests.

Suicide of ex-US gymnastics coach after being ...

Caster Semenya takes her Case to the European ... 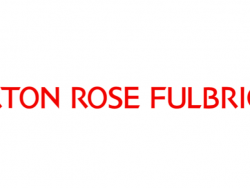 Gone to Pot? What works and what does not — by the man who tried to convince UEFA back in 2013

Andrea Agnelli, the president of Juventus and the European Club Association (ECA), is supporting UEFA’s...

BBC Panorama confirmed that journalists have been threatened following an exposé of Daniel Kinahan’s involvement...

The Russian Olympic Committee (ROC) is taking legal advice regarding the Court of Arbitration for...