Decisions affecting the rights of athletes: a Russian perspective

The International Assocaition of Athletics Federations (IAAF) decision to ban Russian athletes from international competition has angered many Russian athletes, who argue that they are being unfairly punished for the actions of others. Russian lawyer Sergey Yurlov examines whether the IAAF decision deprives Russian athletes of the fundamental rights guaranteed to them by international treaties, and whether it goes against the spirit of the World Anti-Doping Code. He also explains how sporting bodies have shifted the burden of proof by requiring them to prove they are clean to compete.

On 13 November 2015, the International Association of Athletics Federations (IAAF) provisionally suspended the Russian athletics federation (RusAF) following certain allegations relating to the creation of a state sponsored drug use program. More importantly, the IAAF published on its official website a list of athletes prohibited from participating in international sporting competitions. The list includes more than 4,000 athletes.

On 17 June 2016, the 204th extraordinary Council Meeting of the IAAF decided not to reinstate RusAF’s membership and not to allow Russian athletes to take part in international sporting competitions including the forthcoming 2016 Rio Olympic Games (hereinafter –  ‘Decision’).

Making the Decision, the IAAF relied on the following:

• Russian authorities have not created a strong and effective anti-doping infrastructure capable of detecting and deterring doping;
• there are allegations that not only does the Russian government not tackle doping, but it also covers up adverse analytical findings;
• there is still no culture of zero tolerance for doping; and
• the RusAF does not meet the reinstatement conditions in general.

On 21 June 2016 the International Olympic Committee’s (IOC) Summit adopted a Declaration upholding the Decision (hereinafter –  ‘Declaration’). The IOC recognises the Decision and believes that most Russian track and field athletes are ineligible to take part in the forthcoming 2016 Rio Olympic Games. This article provides a review of the Decision and Declaration, and analyses arising legal issues.

Unfortunately, the Decision and Declaration lead to the following dire consequences:

According to the IAAF statements, its members should tackle doping in order to protect the rights of clean athletes. What constitutes a  ‘clean athlete‘? It appears that the term ‘clean athlete’ refers to those who have never tested positive. Such athletes do not use performance-enhancing drugs and therefore participate fairly in sporting competitions.

Of note is that the IAAF is going to leave the ‘competition door’ open for the following athletes:

The IAAF may entitle these athletes to participate in international sporting competitions on an individual basis, subject to certain conditions being met.

In its Declaration, the IOC addressed the issue of balance between collective and individual liability. The IOC highlights that it is impossible to prohibit doped athletes from participating in the next Olympic Games. In the meantime, the IOC is going to suspend all athletes who have tested positive following the retesting of samples taken at the Beijing 2008 and London 2012 Olympics.

Given the substantial allegations, the IOC also questions the presumption of innocence of Russian athletes. Therefore each international sports federation should decide on the eligibility of particular athletes.

However, two questions arise in this regard. Why are the allegations considered substantial? Why do the IOC shift the burden of proof to athletes? The IOC promotes the idea that the allegations are substantial. It must be noted that the allegations are mainly based on admissions of certain former anti-doping officers and sports federation officials. These allegations have yet to be verified. Thus, without establishing that certain allegations are true or false, the IOC, IAAF and other international sports governing bodies impose sanctions. The second issue is that the IOC, for unclear reasons, questions the presumption of innocence of Russian high-level athletes. In actuality, the IOC turns the principle that ‘the Anti-Doping Organisation shall have the burden of establishing that an anti-doping rule violation has occurred’, which is prescribed by Article 3.1 of the World Anti-Doping Code (hereinafter – ‘Code’) inside out. In the IOC’s construction, the principle reads as follows: athletes are presumed guilty unless they can prove they are innocent.

It appears that there are no reasons for not applying the abovementioned principle as it is. Turning the principle inside out, the IOC and IAAF violate the rights of clean athletes. In actuality, the IOC and IAAF treat these athletes less favourably than criminals, who are innocent until proven guilty.

According to Article 11 of the Universal Declaration of Human Rights 1948 ‘everyone charged with a penal offence has the right to be presumed innocent until proved guilty according to law in a public trial at which he has had all the guarantees necessary for his defence’.

According to Article 6 of the Convention for the Protection of Human Rights and Fundamental Freedoms 1950 (as amended by Protocols No. 11 and No. 14) ‘everyone charged with a criminal offence shall be presumed innocent until proved guilty according to law’. Thus, in their zeal to ‘protect’ the rights of clean (innocent) athletes international sports governing bodies deprive them of their fundamental rights prescribed by international treaties.

It must be noted that the IAAF concluded that the RusAF does not meet its requirements. Why do we sanction innocent athletes? The question is left open…

We should acknowledge that an athlete practicing an individual sport is not an independent sports subject. On the contrary, he (she) is dependent on international and national sports federations. Applying to a national sports federation for an entry approval is the only possible route by which he (she) can take part in a sporting competition. Although the Olympic Charter stipulates that practicing a sport is a human right, athletes are prohibited from filing entry forms on their own.

Thus, sanctioning (disqualification, suspension etc.) a national sports federation, an international sports federation automatically deprives compliant (clean) athletes of their rights prescribed by the Olympic Charter. In other words, modern athletes become ‘slaves of a flawed sports system’. On one hand they have the right to compete, but on the other hand they cannot do so without applying to sports governing bodies. Therefore this right is unenforceable.

It appears that the solution lies in authorising athletes practicing individual sports to file entry forms to competition organisers directly. The IOC, national and international governing bodies should impose basic criteria applicable to nominees. Such criteria should only relate to the athletic performance – compliance with qualifying time standards (i.e. A and B qualifying times for the Olympic Games), the existence of a particular sport grade (i.e., special sport categories. For example, to obtain such a sport grade in Russia an athlete should demonstrate the required result in a particular event. Afterwards, an athlete files an application with the Russian Ministry of Sport requesting a conferment of a sport grade. A sport grade is granted by an order of the Russian Minister of sport) and the existence of a medical statement issued by a special medical institution certifying an athlete’s medical condition and that he or she and able to participate (hereinafter – ‘Eligibility test’)1. 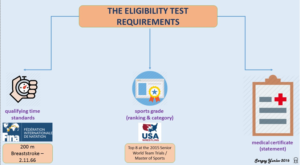 Whoever meets this Eligibility test has the right to participate without additional hidden requirements (see the figure below). Every athlete meeting the eligibility test should have the right to compete irrespective of the status of his (her) national sports governing bodies. 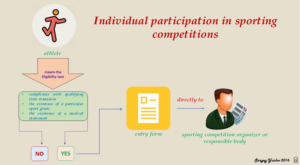 Otherwise, sport will not develop and will turn into a private activity. What can safely be said is we should start ‘curing’ the sports system today. We cannot put it into cold storage.

• Scientists from the University of Strasbourg, engaged by French Police, have found Tizanidine in...

World Triathlon has imposed a period of ineligibility of three years on Russian triathlete Igor...