• The IOC Executive Board (EB) has taken not and discussed the circumstances of the allegations against and the arrest of Mr Carlos Nuzman, in particular concerning the vote for the host city of the Olympic Games by the IOC Session in 2009.

With regard to the status of Mr Carlos Nuzman as an IOC Honorary Member, the EB, following the recommendation of the IOC Ethics Commission (see annex), decides with immediate effect:

• To suspend Mr Carlos Nuzman provisionally from all the rights, prerogatives and functions deriving from his quality as an IOC Honorary Member; and
• To withdraw Mr Carlos Nuzman from the Coordination Commission for the Olympic Games Tokyo 2020.

With regard to the Brazilian Olympic Committee (COB), the EB states that the COB and its President, Carlos Nuzman, were responsible for the candidature of Rio de Janeiro in 2009. Therefore, the EB takes the following decision with immediate effect:

• To suspend provisionally the Brazilian Olympic Committee.
• According to Rule 59 of the Olympic Charter, provisional suspension in this case means in particular:
– Subsidies and payments from the IOC to the COB are frozen.
– The COB is not allowed to exercise its membership rights in NOC associations.
– To protect the interests of the Brazilian athletes, this decision shall not affect the Brazilian athletes.
– Therefore, the IOC will accept a Brazilian Olympic Team in the Olympic Winter Games PyeongChang 2018 and in all other competitions under the umbrella of the COB with all rights and obligations.
– Olympic scholarships to Brazilian athletes will continue to be paid.
• This provisional suspension may be lifted partly or fully when the governance issues of the COB have been addressed to the satisfaction of the EB.

The IOC reiterates its full commitment to the protection of the integrity of sport. The IOC will continue to address any issue affecting this integrity under the rules and regulations of its recently reformed governance system. In order to follow up this case properly, the EB asks all judicial authorities to provide the IOC Ethics Commission with all the available information at their earliest convenience. The IOC will continue to fully cooperate with all these judicial authorities. It is in the highest interests of the IOC to be able to fully address such matters concerning an IOC Member or an IOC Honorary Member as soon as possible, in order to protect its reputation as an organisation.

• This media release was originally published by the International Olympic Committee (IOC) on 6 October 2017. To access the original, please click here. 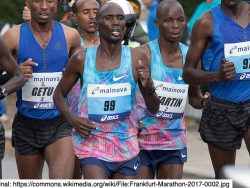