Athletes currently serving a sanction for a ‘substance of abuse’ can apply for a reduction, now that the 2021 World Anti-Doping Code has come into effect. The World Anti-Doping Agency (WADA) has previously confirmed that athletes whose sanction expires after 1 January 2021 can apply for a review of their case under the new ‘substances of abuse’ rules, which came into effect on 1 January. This is expressly provided for by Article 27.3 of the 2021 Code (see right).

The main change to the 2021 Prohibited List highlighted by WADA is that cocaine, heroin, MDMA (ecstasy), and cannabis are recategorised as ‘substances of abuse’ under Article 2.4.3 of the 2021 Code. Under the 2021 List (as with the 2020 List), these substances are considered ‘specified’, which means that they are only prohibited in competition.

The change means that if an athlete returns an adverse analytical finding (AAF) for a ‘substance of abuse’ from an in competition doping test, they will be subject to a three month ban if they can establish that their use occurred out of competition and was unrelated to sporting performance. If an athlete agrees to a treatment programme, this ban can be reduced to one month.

Under the previously applicable 2015 Code, the starting point for a sanction was either a four year ban (cocaine) or a two year ban (heroin, MDMA, and cannabis) for an in competition AAF. Athletes still serving sanctions for anti-doping rule violations (ADRVs) involving these substances can apply to the anti-doping organisation that issued their sanction for a reduction. If an athlete is able to demonstrate that use occurred out of competition and was unrelated to sporting performance, then their sanction can be reduced.

Under the 2015 Code, an athlete who tests positive for cannabis at 8am on game day who can prove that they ingested cannabis at 9pm the previous evening would be judged to have ingested cannabis ‘in competition’, and would subject to a two year ban. Under the 2021 Code, they would be judged to have tested ingested cannabis outside of competition and would be subject to a three month ban (one month if a treatment programme is agreed). However, it is important to stress that a two year ban remains in place for ‘substances of abuse’ if an athlete is unable to demonstrate that ingestion occurred outside of competition.

It is important to emphasise that this list is not absolute – it is solely for illustrative purposes. Additional cases involving ‘substances of abuse’ will have been reported by anti-doping organisations (ADOs), and some of the listed cases may feature extenuating circumstances, which may mean that the athlete concerned is not eligible for a reduction.

However, due to changes introduced to the 2018 Prohibited List, cannabidiol (CBD) is no longer considered prohibited. As such, there is a danger that athletes may mistakenly think that WADA has given cannabis the green light (pardon the pun). This interpretation isn’t strictly accurate.

The 2021 Prohibited List mentions ‘natural cannabinoids, e.g. cannabis, hashish and marijuana’ and ‘synthetic cannabinoids e.g. Δ9-tetrahydrocannabinol (THC) and other cannabimimetics’ as prohibited in competition. As such, any athlete that uses CBD based products must be sure that they contain none of the above ingredients in order to avoid an AAF.

Many CBD products will contain small amounts of the cannabinoids featured on the List. A quick Google search identified CBD products such as tea, chocolate, cookies, ice cream, chewing gum and more. Anti-doping laboratories will be able to detect 0.3% THC or lower, which is the upper legal limit by which many US States qualify industrial hemp.

In July 2020, a narrative Review highlighted a lack of scientific studies detailing CBD’s impact on sports performance. However, it also referenced pre-clinical studies and clinical trials in non athletes suggesting that CBD may have physiological, biomechanics and psychological effects that benefit athletes.

According to the US Food and Drug Administration (FDA), some CBD products are being marketed with unproven medical claims and are of unknown quality. It also remains illegal to market CBD by adding it to food or labelling it as a dietary supplement. As such, due to the changing legal nature of cannabis in the US, it does appear that athletes are now a target for CBD products claiming to assist with athletic recovery. As highlighted, there is a danger that some CBD products will result in an AAF.

Out of the woods?

‘Substances of abuse’ have presented a conundrum for anti-doping for some time. Whilst it is perhaps easy to see how a stimulant such as cocaine could be considered performance enhancing, MDMA and cannabis are arguably detrimental to sporting performance (there is an argument that cannabis might enhance performance in precision sports such as archery, darts, or curling). In the case of motorsports, all are considered dangerous, which is one reason why they remain prohibited in competition. 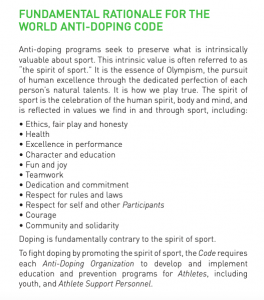 A substance doesn’t have to be performance enhancing to feature on the Prohibited List. WADA may include any substance or method that satisfies two of the following three criteria on the List:

• It has the potential to enhance or enhances sport performance;
• It represents and actual or potential health risk to the athlete;
• It violates the ‘spirit of sport’ – for a definition from the World Anti-Doping Code, see right.

The logic behind the change is perhaps revealed in stakeholder commentary for reasons that changes need to be made to the 2021 Code (see right). Athlete wellbeing is a concern, but so is spending resources arguing the appropriate sanction length for an athlete who had no intention to cheat. The flat three month sanction (one month with rehabilitation) eliminates that cost.

It remains to be seen how an athlete will demonstrate that their use occurred outside of competition in order to benefit from the ‘substances of abuse’ clause. The case of Brent Naden presented an insight. Naden told Sport Integrity Australia (SIA) he had taken cocaine the day before the National Rugby League (NRL) Grand Final for recreational purposes. SIA accepted his explanation, concluding that for cocaine to be performance enhancing, Naden would have needed to take it much closer to kick off.

This appears to be the common sense approach (i.e. SIA didn’t require footage of Naden’s ingestion of cocaine) to the term ‘unrelated to sport performance’ outlined in the ‘substances of abuse’ clause in the Code. It remains to be seen whether other ADOs will follow the same approach.

It also remains to be seen how ADOs will handle AAFs for cannabinoids that result from use of CBD based ‘supplement’ style products. The ‘substances of abuse’ clause may not apply, as although use may have occurred outside of competition, it would be difficult to argue that use was unrelated to sporting performance.

Finally, how ADOs will handle applications from athletes keen to reduce their sanctions under the ‘substances of abuse’ clause will be interesting to watch. As illustrated above, there could be many applications, which may result in a bonanza for lawyers and a headache for ADOs.

Nine athletes from eight countries, competing in six sports, were involved in anti-doping proceedings that...

While the bombs fall, so do table tennis balls…

1xBet, a betting company that briefly sponsored Chelsea, Tottenham and Liverpool and is run by...

As reported by Josimar, 1xBet has recently been declared bankrupt for failing to reimburse customers....