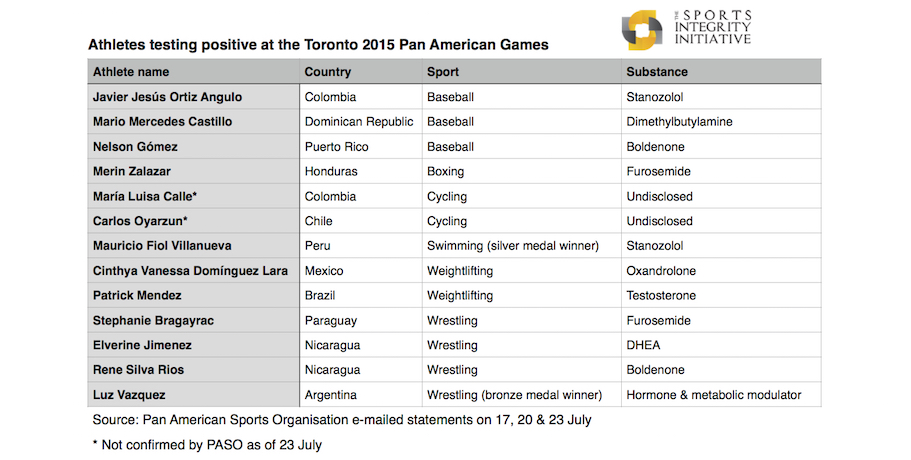 Those testing positive include Mauricio Fiol Villanueva from Peru, who took a silver medal in the men’s 200m butterfly on 14 July. In an 18 July statement, the Peruvian Olympic Committee (COP) confirmed that Fiol contests the finding. ‘Villanueva has requested analysis of the B sample taken on 12 July’, read an 18 July COP statement, which can be found on the COP’s internet site. ‘The result will be known within the next ten days’.

Wrestler Luz Clara Vázquez from Argentina, who took the bronze medal in the freestyle 69kg category, tested positive for a hormonal and metabolic modulator. She has accepted the finding. “I deeply regret having defrauded everyone who supported me in this way and, even more painfully, having harmed the image that Argentine sport presents to the world”, she said in a statement reported by Clarin, which claims the substance involved is GW501516.

GW501516, which is known by a variety of other names, was developed to burn fat whilst exercising, but was withdrawn from development after Glaxosmithkline found that it caused cancer in rodents. The World Anti-Doping Agency (WADA) issued a warning about the substance in 2013, however the Belarus national anti-doping agency (NADA) recently sanctioned an athlete for using it. A 20 July statement from the Argentine Olympic Committee (COA) confirmed that it is investigating.

FG-4592 is a compound designed to increase an individual’s red blood cell count and is used to combat anaemia. As red blood cells carry oxygen around the body – specifically to the muscles – it can be used by athletes to enhance performance. It is understood that FG-4592 does’t raise blood pressure in the same way as EPO, thereby reducing the risk of a heart attack due to ‘thickened’ blood. In April, French race-walker Bertrand Moulinet admitted using FG-4592 to enhance performance.

Lasitskene Decision: can an athlete challenge ...

A tennis player has been sanctioned with a 20 month ban for an anti-doping rule...

The appeal filed by Aleksandr Shustov is dismissed and the initial sanctions are confirmed: 4 year period of ineligibility